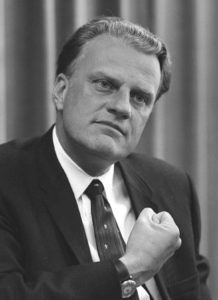 The man who preached the saving Gospel of Jesus Christ to more souls than anyone in the past 2,000 years. A man gifted by the Holy Spirit with the supernatural gift of evangelism.

This is what Jesus meant when he said, “Greater works shall you do.” He was speaking quantity, not quality.

He was flawed as we all are. Like well-meaning preachers who compromise by buying airtime on TBN or any other ‘Christian’ network that uses shysters to raise their seed money, I called them out publicly, although I doubt they were listening.

Like so many other ecumenically minded ministers and Christian music artists, Graham entertained wolves to open the door to their goats and sheep.

I’ll never forget a conversation I had with a former colleague my husband worked with on a Christian publication. Ed Plowman was an editor at Christianity Today before becoming Billy’s press agent. Ed traveled around the world with him in the 1960s. He told us that one day Billy looked very troubled and told Ed the dilemma he faced. He said he knew the Roman Catholic Church had so many false teachings and didn’t want to associate with them, but if he didn’t offer them the right hand of fellowship, he would be barred from holding crusades in Catholic countries. The only way he could live with it would be the knowledge that if Catholics heard the true Gospel of Jesus Christ, the Holy Spirit would eventually lead the new believer out.

Well, that’s how it started, but it didn’t take long before his organization was pressured into returning those coming down in the altar calls back to Catholic officials who would be there alongside other churches to take it from there. Keep in mind that while his crusades were getting results in those Catholic countries, Vatican II was in session, in which the Catholic Church was hard at work to make themselves more palatable to their Protestant comrades.

Unfortunately, that compromise led the way for many who followed and the end result was the popularization of the ecumenical movement and true doctrine taking a back seat for the sake of expediency.

Billy Graham’s public relations decisions are the norm for all the stadium crusades for evangelists like Greg Laurie and false revivalists like Lou Engle and all the rest.

I do know one thing: Thanks to the work of Billy Graham, millions of people heard the Gospel, got born-again, and indeed left the Catholic Church as a result. Since the Billy Graham crusades began and Vatican II’s ecumenical changes took place, Rome has lost the allegiance of around 800,000,000* souls, even though they are still counted in the  rolls of one billion since ‘once a Catholic, always a Catholic’ is the policy of Rome.

So in spite of our 20-20 hindsight in believing Billy Graham made the wrong call for the purity of the Church of Jesus Christ, he still deserves the honor of going down in history as the greatest evangelist of all time. That cannot be taken from him. Rest in eternal peace, Billy!!

*See this report from Catholic reporter and  militant Michael Voris who gives the numbers of Catholics on the roll who have left.  https://www.youtube.com/watch?v=tROfadFVM4Q&feature=share