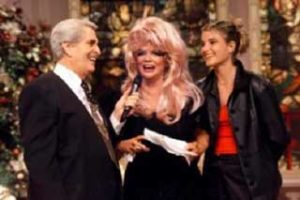 Growing up, I liked to take advantage of the fact my grandparents invented church on television whenever it was convenient for me. My mom was raised in an extremely legalistic Christian home and had been taught to believe that ‘good Christian people’ went to church every Wednesday evening and Sunday morning and every time they went they had to wear their “Sunday best” outfits complete with hose that were three sizes too small and bows bigger than my head.

Naturally, I grew to hate the “church” experience. I couldn’t stand it. Everyone would run around the house yelling at each other to change their shirt, wear a nicer dress, and hurry up we’re running late! One morning we were going through this charade and my dad told me to get a move on it. I finally looked at him and said “Why the heck do we have to go to church when we can just watch it in our underwear at home?!”

There was something so fake about my church experiences just like the feeling I had on ‘photo shoot’ day at TBN. On the ride to church we often heard the same lecture of what we can say and what we can’t say. Don’t use words like “shoot” or “darn it” because those could be considered blasphemous. Cross your legs, act like a lady, and don’t talk back to your pastor even if you don’t understand or disagree with something they say. There were more rules for church than any other activity in my life and it was uncomfortable.

I’m not sure that was the reasoning behind my grandfather’s vision of putting Christian programming on television but it would have worked for me at the time. My grandfather was born in Egypt, the youngest son of two American Christian missionaries living abroad. Unfortunately, his father died due to a weak heart when he was only 6 years old and the family was forced to move back to the United States. However, the “missionary” mentality he was raised with never left him. There is a verse in the bible I had heard him say hundreds of times when talking about his desire to begin a ministry through television – Mark 16:15 “And he said to them, ‘Go into all the world and proclaim the gospel to the whole creation.’” That’s exactly what my grandfather was trying to do.

Originally, my grandfather thought the quickest way to spread God’s word to the rest of the world was through the use of radio. He was always a bit of a ‘technology geek’ playing around with radio transmitters and receivers. It wasn’t until he had gone into town one day as a teenager that he saw his first color television. He used to make the hour long trek into town just to sit out front of the local convenience store and watch the colored bars of the television test pattern they would display in the store window. I think it would be fair to say it was love at first sight, although he didn’t get the opportunity to delve into that market until many years later; after he had met and married my grandmother.

My grandfather ended up meeting my grandmother at a tent revival meeting where my grandmother’s father, Reverend Edgar Bethany, was preaching. My grandmother had recently been expelled from college, much to her father’s shame and embarrassment. My grandmother was looking for a way to settle down and please her father at the time she met my grandfather and my grandfather was looking for someone who could fill the role of “pastor’s wife” since he had recently finished up his studies at the Central Bible Institute in Missouri in 1955. They married in 1957 and began their life together in Rapid City, South Dakota. They spent four years there after my grandfather took a position as an announcer for a local radio station. He was a natural for the position and quickly worked his way to head of the station. They also served as co-pastors for a small church on the side while my grandmother took a few odd jobs in order to make ends meet.

Interestingly enough, my grandparents’ recollection of the early days of their marriage vary significantly. If you asked my grandfather what it was like he would tell you about how he used to hunt deer and bring it home for my grandmother to cook or tell a funny story about how their car had gotten stuck in the mud. In order to get it unstuck he had my 8 months pregnant grandmother sit on the trunk of the car to weigh it down enough to gain the necessary traction to dislodge it. It was an overall optimistic view of a simple life. They were young and poor but seemed to make the most of their days together.

In drastic contrast, listening to my grandmother’s stories of her marriage was like listening to something out of an episode of ‘Tales from the Crypt’ – too horrifying and bizarre to be reality. Right before I was preparing to marry my college sweetheart, Michael, my grandmother kept telling me how lucky I was to have found someone so gentle and handsome. I commented that she hadn’t done so bad herself with papa, which immediately sent a rage through her soul that I could see flare out of her eyes. She waved her hands in the air and said, “Papa? Please! He used to treat me like a punching bag! You wouldn’t believe the shit he’s put me through!” Clearly I was a bit dumbfounded because, although I didn’t really have a close relationship with my grandfather at this point, I couldn’t imagine him ever being violent with anyone. I could see that he had a bit of a temper and a sharp tongue, but violent? I thought that would have been the worst of it but then she went on: “did you know I used to have to go lay myself behind his car to keep him from going out and having sex with other men?! He used to get so trashed he’d take our car to the public restrooms to solicit sex from men! I had to pick him up from there one time! It was disgusting!” Okay, she had me now – where exactly was she going with this?

I had always heard rumors that my grandfather was gay but it was never anything that had bothered me that much. I thought it was another silly rumor people made up in order to make another “religious right-wing” public figure look like a hypocrite. According to my grandmother however, not only was it one hundred percent true, it was clearly something my grandfather had been struggling with for a long time. It breaks my heart knowing my grandfather must have endured such an internal struggle and strife with himself. I believe it may have been what led to his excessive drinking and self-medication that ultimately weakened his heart and diminished his mental capacities to the point three years before his passing we were having to keep things from him and dumb things down to the point a grade school child could understand them. To say my grandfather was an alcoholic would have been an understatement. He was just an addict – it didn’t matter if it were alcohol, prescription drugs, Afrin, or herbal tea. Anything that made him feel ‘good’ and gave him a temporary high became a daily routine.

He and my grandmother were living with their two sons, my father, Paul Jr., and my uncle Matt in Southern California in the mid 1960’s. My grandfather had taken a job as the general manager for a local radio station in Corona, California. In 1970 he left to manage two Christian stations – one radio and one television – located in San Bernardino, California. It was during this time that they received an opportunity to rent a few hours of air time from a local television station. They teamed up with Jim and Tammy Faye Bakker, two local ministers they were friendly with at the time, and went to work.

Eventually, the owner of the television station was interested in selling his broadcast license and approached my grandfather about the possibility of taking over the entire channel. This was an opportunity they couldn’t refuse. The four of them ended up acquiring the license but after a few years the Bakker’s moved to the East coast to start their own ministry, the PTL Club, due to a dispute between my grandfather and Jim.

From there, my grandparents devoted their lives to TBN and it spread like wildfire. First acquiring another station in Arizona, then Washington, then Tennessee, and so on and so forth until it grew to become what it is today – a monster among media broadcasters boasting annual revenues north of one hundred million dollars and a total net worth of over one billion dollars. We truly became the First Family of Televangelism. What the world saw was a beautiful family who loved each other and were dedicated to the service of God and spreading His message around the world. What they didn’t see were the souls we crushed, donors we lied to, vices we hid, and knife wounds we covered beneath our fancy clothes.

See Jackie Alnor’s free PDF of her book, The Fleecing of Christianity for a deeper look at Christian Television –