“Do not receive an accusation against an elder
except from two or three witnesses. Those who are sinning rebuke
in the presence of all, that the rest also may fear.”
– 1 Tim 5:19-20

“My brethren, let not many of you become teachers,
knowing that we shall receive a stricter judgment.”
— James 3:1

I’m very happy to complete this series that pained me more than you know to write. To say no to the prompting of the Holy Spirit would have been a grave sin on my part. (Stop rolling your eyes.)

I watched with great interest your recent Moriel TV teaching called The Quagmire, adapted from The Pilgrim’s Progress. Like you, it is my favorite book outside of Scripture. I have an audio dramatization of it published by Answers in Genesis and if I can’t sleep, I play it and it sooths me to sleep. I’ve been doing that for years – so you can imagine how absorbed in it I must be by now.

So it really caught my attention when you said, “Every believer will go through a quagmire surrounded by death. John Bunyan understood this when he wrote about the slough of despond… He kept having to deal with false brethren. and he went through after the wicket gate… There is no believer who will not be in the slough of despond, a kind of quicksand. It seems like you’re not going to get out of it… this is the reality of being a Christian.”

Well, you put yourself in the quagmire you find yourself in. I laid out to you in this series how you managed that. But I got an entire different understanding of the ‘slough of despond’ than you. And it does reveal a bit about you. In the book, there were no born-again believers in the slough – only two seekers, Christian and Pliable. Pliable pulled himself out going back to the place they entered it, but Christian kept moving forward, sinking deeper due to the burden that he carried on his back. That burden was his sins. Due to them he almost drowned, but the character ‘Help’ pulled him out and explained to him the nature of the mire. Christian didn’t have that burden taken off his back until several chapters later when he received the Gospel after a vision of Jesus on the cross.

So Christians do not go into the slough. Christians are those who had been weighed down by their sins, but once saved, they no longer carry the burden of sin. The slough came as they were drawn by the Lord, but salvation comes when the seeking is over.

So if you’re in the slough – you’re still in your sins.

I see you more as ‘the man in the iron cage’ of whom repentance has not been granted — who dreads what lies ahead. ‘A bungalow on the edge of paradise,’ as you call it, is rather optimistic.

Christian: For what did you bring yourself into this condition?

Man in the Iron Cage: For the lusts, pleasures, and profits of this world; in the enjoyment of which, I did then promise myself much delight: But now every one of those things also bite me, and gnaw me, like a burning worm.

Christian: But can you not now repent and turn?

Man in the Iron Cage: God has denied me repentance. His Word gives me no encouragement to believe; yea, He Himself has shut me up in this Iron Cage. Nor can all the men in the world let me out. O Eternity! Eternity! How shall I grapple with the misery that I must meet with in Eternity!

Interpreter: Let this man’s misery be remembered by you, and be an everlasting caution to you.

Christian: Well said. This is fearful; God help me to watch and be sober, and to pray that I may shun the cause of this man’s misery.

You have become the poster boy for apostasy. People look at you as a warning to stay true to Jesus and not allow their hearts to be filled with hate.

I’ve already noted this in the series, but the object of your hate are those who hold to a Pretrib rapture.

Hatred of the imminent rapture was your undoing. That hate closed doors of opportunity. You hated being cut out of the action of the big time. That hate lost you good friends. That hate changed the countenance of your face. That hate led you to bad decisions. That hate quenched the Holy Spirit. Your soteriology leaves you without hope. You’ve done ‘despite unto the Spirit of grace.’

Your hate brought you to this point because you embraced that false teacher only because he had the same pet peeve as you — antagonism against those looking for the return of the Lord Jesus Christ. And then the hate and venom just grew, which is why I posted your diatribe against the Pretrib rapture on YouTube (see link below) as if imminency was something evil — you even called it satanic. Let me tell you because of that, you risk missing the rapture altogether.

You say that the Pretribbers aren’t ready for tribulation but that is a lie. The only way to be ready for any trials in life is to hang in there close to the Master. These Pretribbers who love Jesus are excited for His return and more prepared to confront the Antichrist than you are. And those like myself who believe in imminency, our lives are joyful. It’s the hope that gets us through.

As you’ve recently pointed out, in the 80s and 90s I was discipled under the leadership of Chuck Smith, Dave Hunt, and Walter Martin. Dave and Chuck were Pretrib and Walter was post-trib. I also had more distant friendships with men like Stuart McBirnie, a Mid-Tribber and Hal Lindsey, the most famous Pretribber of all. But in all those discussions between all of these godly men, they respected one another’s positions. They agreed to disagree agreeably on something that is debatable among Christians. But debate didn’t turn into World Wide Wrestling until you came out slugging. You set the tone for what developed into the rapture wars. Your leadership created some of the worst conflict among believers in recent church history.

It wasn’t just in your books shadows and harpazo, but also in your public teachings in which you shouted at your opponents and challenged them to hand-to-hand combat like Hulk Hogan, or in your case The Incredible Hulk. When they wouldn’t jump into the ring with you, you had a whole list of nasty names to call them. But no decent minister of the Gospel dared make a mockery of the faith by wrestling in the mud with you.

As a ‘woman on the watch’ I witnessed you distort the once amicable differences of opinion of the timeline of end times events into a bone of contention and point of division in the Body of Christ. Your venom spread like gangrene.

Just today after uploading your tirade against the Pretrib rapture, saying it was “satanic” – I watched as the comments below the video displayed a rapture position skirmish before my eyes. And I blame you for that! You set a snare for others and they took the devil’s bait. Everywhere you go, you cause friction over your pet topic where it never, ever, existed before you went on your wicked crusade. You started it and you keep it going. You had to be a big shot, didn’t you?

To get my mind off this, I turned to the Sunday message of one of my favorite online pastors/prophecy teachers. Coincidentally, his topic was on the rise of mockers in the last days – especially those fighting his position, the Pretrib rapture. That caught my attention. And then I heard him utter the words, the Post-trib rapture is a false doctrine.

And that’s not the first time I’ve heard that from the opposite side as you. But I know for a fact, that you set the stage. It explains why your anti-Pre rhetoric has gotten worse lately – you always have to one-up them.

I say to all sides who falsely label one another’s theory of the Rapture timing – STOP IT!!!

“Furthermore, he must have a good reputation among outsiders,

so that he does not fall into disgrace and the devil’s trap”. – 1 Timothy 3:7

That’s the qualifications of an elder. Not only do you not qualify, but you exemplify the warning as you have fallen into disgrace and the devil’s trap. You then spread your leaven throughout the entire church.

You were angry that the Menelaws sold distribution rights to the film. However, what you might not know is that due to your bad reputation, The Daniel Project documentary ran into a brick wall finding Christian distributors due to the fact that you were in it. Your un-Christian behavior in public put a jinx on the project. As it turns out, you were a very bad casting choice.

You could have spared yourself the bad direction you took earlier this century, had you heeded my advice. (See copy of my email below.) You often say that women hear from the Lord better than men – so listen up!

You screamed at me in that triggering video, “I’m not accountable to you.” No Jacob, but you are accountable to God. He’s been very patient with you as you’ve left a trail of injured saints in your path.

Consider this: If God sent me to Pittsburgh to purge the sin from the camp and everyone in that little church agreed that that’s what God did, then what makes you think He was overlooking what you were doing? And if He is sending me now to confront you, then you better watch how you respond because He is watching. Harden not your heart.

Goodbye Jacob, rant away. I’m done with you.

May the Lord grant you repentance, 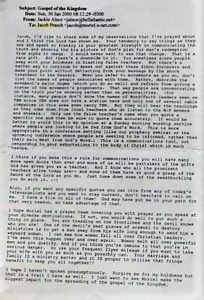 My Moriel Memories — Part I

Jacob rightly sizing himself up:

Jacob’s typical rant against the rapture