More than 60 years ago athiest George Orwell wrote, “In our time, political speech and writing are largely the defence of the indefensible.” The national media’s rejection of biblical truth has created a climate for fake news to flourish. The corrupting influence of sin has made its way into the religious media world giving voice to the prosperity gospel and other destructive heresies.The Christian Sentinel enters this darkened media world to share truth and encouragement. Our objective is to keep the living saints informed on current events, to defend persecuted believers, to equip the followers of Jesus with a biblical worldview and to oppose destructive heresies contaminating the Church.Therefore, the Christian Sentinel will shine the light of God’s Word upon all the seductive lying narratives of the enemy so that the nature of the beast is exposed and loses its power to deceive the elect.“Let us hold fast the confession of our hope without wavering, for He who promised is faithful. And let us consider one another in order to stir up love and good works” —  Hebrews 10:23-24“And have no fellowship with the unfruitful works of darkness, but rather expose them.” – Ephesian 5:11

The original quarterly, the Christian Sentinel, was in print for five years, from 1992 to 1996, at which time it became an online periodical until about 2009.  It was part of the ministry of Eastern Christian Outreach (EChO), a non-profit organization in Philadelphia that specialized in evangelizing those ensnared by cults and shepherding groups that were wreaking havoc in the eastern seaboard in the 1980s. 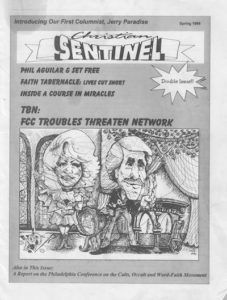 “EChO was founded in 1984… as an outreach to evangelize the cults. The first president was journalist Bill Alnor. Meanwhile on the West Coast the former Jackie Miller was involved in her own ministry, publishing a newsletter called The New Age Alert. Bill and Jackie met in 1987 and were married later that year by the late Dr. Walter Martin, combining their extensive files and resource materials.” [From the first issue of the Christian Sentinel]

Bill and Jackie wrote for various Christian publications such as Eternity Magazine, Christianity Today, Religion Report, RNS (Religious News Service) and others before starting their own publication. Bill was the news editor of the CRI Journal for several years under Dr. Martin’s leadership until his passing and the Alnors wore out their welcome. Bill completed his education, earned his PhD at Temple University, and became a tenure-track journalism professor while still working with his wife on the Christian Sentinel online. When he was diagnosed with cancer, he ended the online updates while Jackie turned her attention to her own research, writing books, and starting her blogtalk radio program on Rapture Ready Radio. Bill lost his battle with cancer in 2011.

The Christian Sentinel had some groundbreaking investigative reports that had mixed reviews, depending upon who you ask, at a time when few journalists in the church would report on anything controversial. Titles included, “Did Benny Hinn Repent?”; “Televangelist Morris Cerullo Caught Faking Healing”; “TBN’s Joseph Good Denies the Trinity”; “Holy Laughter: Is it Biblical?”; and “The Cult of Sophia.”

The relaunched Christian Sentinel, under the direction of Jackie Alnor and Barry Bowen, both seasoned Christian journalists and researchers, will carry on the tradition of keeping the Body of Christ informed on issues in the Church without regard to political correctness.

Jackie Alnor is a veteran researcher, writer, activist, and defender of the faith. She is the director of the Rapture Ready Radio network and host of the Scattered Sheep Report. She is the author of the book, The Fleecing of Christianity and her testimony is included in the book, On the Wings of Grace, an anthology of ex-Catholics edited by former priest Richard Bennett. She has a BA degree from Texas A&M University in the field of Communication/Media and was trained in apologetics at the former Simon Greenleaf School of Law. Under the auspices of her networking association, Women on the Watch, she coordinates an annual conference attended by hundreds of women who share her concern for discernment in the end times. She wrote and produced the highly acclaimed 1999 video “The Great Apostasy: The Lost Sign” in an effort to expose the influence Christian television has played in spreading the great falling away. Alnor has been monitoring, taping, and documenting religious programming since the 1980s and her clips have been used by many apologetics ministries in many video exposés.

As the son of a Baptist minister, Barry Bowen grew up reading Christian magazines and realized that Christian media had great potential to cover topics rarely discussed in Sunday School or the pulpit. He graduated from Nicholls State University in 1993 with a BA degree in Mass Communications.  In 2000 he founded the website Christian Headlines and published the news aggregator for 11 years while also working in the Christian film industry as a publicist and production assistant. He currently posts prayer lists at the aggregator Prayer News. For three years he worked as blog manager at The Christian Post. He also served as a third-party whistleblower digging up corporation and property records during Senator Grassley’s inquiry into tax avoidance and fraud committed by televangelists. Bowen is writing a book about religious financial fraud and hopes to release What Would Judas Do? sometime in 2017.