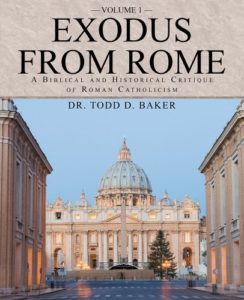 “Exodus from Rome” is a scholarly, but readable refutation of Roman Catholic claims and dogmas by Dr. Todd Baker, staff theologian for the Zola Levitt Ministries. Dr. Baker’s solid background in the historical context of the Old and New Testaments, as president of B’rit Hadashah Ministries, qualifies him to pinpoint where the Roman Catholic Church drifts from a Judeo-Christian foundation into a pagan Rome-Centered ideology.

“One particular priest… would frequently enter class in an inebriated state accompanied with an overpowering stench of alcohol on his person… When a student came to his office … he proceeded to help the young man with his difficult homework while he simultaneously put his hands down the front of the boy’s pants… with a drunken glazed over smile.” [pg. 3]

The next several chapters focus on the papacy, the basis of authority as taught by Rome. The entire concept of such an earthly ruler is the antithesis of the teachings of Jesus in the Gospels and the Holy Spirit-inspired writings of the apostles in the epistles.

Chapter two covers “The Doctrine of the Papacy,” beginning with Rome’s claim that Peter was the first pope. The author demonstrates from Scripture just how ludicrous such an idea is to believe that Peter had a superior position over the other apostles or that Peter himself was the “Rock” which would be another way of calling him “the Chief Cornerstone,” which only applies to Christ. He also obliterates the false teaching of apostolic succession and shows from history how the so-called papal line was nebulous, subject to change, and included a plethora of wicked men who even bought the office of pope. In fact, one pope was the illegitimate son of a previous pope. This would be a tainted succession of scoundrels and murderers – by their fruit many of them were enemies of the cross of Christ, not His vicars.

The author noted, “For centuries, the Papacy has been involved with the political affairs of nations and world rulers in its attempt to establish itself as the One Universal Church of the world. Christ, however, said: ‘My Kingdom is not of this world”… The Pope is extravagantly crowned with a triple tiara made of gold upon his coronation while Christ was cruelly crowned with a crown of thorns.” [Pg. 20]

The next several chapters continue to show the history of the popes as being anything but infallible – with one pope speaking “ex cathedra” after another, contradicting each other. But the popes’ invention of The Inquisitions that lasted for seven centuries had to be the cruelest and most diabolical example of the papacy being totally devoid of all things benevolent.

The author puts it this way:

Baker documents how the Catholic Church used the Inquisition to amass great wealth over those seven centuries. Rewards were given to folk who turned in their neighbors for heresy, whether true or not – they could do so anonymously and no evidence was required. The victims’ entire estates were then confiscated by the sadistic clergy and put into Rome’s treasuries. And even if they held up under torture and acquitted, their property was not returned.

I’ll spare you the morbid details of the Catholic Church’s inventions for torture – although many of them are covered in this book. It is estimated that “from 68 million to as high as 150 million” people perished in the most inhumane ways at the hands of the Inquisitors and their secular co-conspirators of the Holy Roman Empire.

In fact, more true believers were martyred by the Inquisition than all of the persecutions of Christianity by the hands of pagan Rome combined. The author makes a strong case in the next chapter for the syncretism of pagan Rome and papal Rome. Both the Roman emperors and the “Vicar of Christ” adopted the term, Pontifex Maximus, for themselves. Both claimed authority to govern “both the religious and secular affairs of the Empire.”

The similarities of pagan and ecclesiastical Rome are too numerous to mention here. But the author lays it all out and traces all back to the religion of Babylon and prophetically what Bible prophecy identifies as the end times religion of Mystery Babylon. As Baker points out:

“Roman Catholic theologians are fond of using the term mystery when speaking about the mystery of faith, the mystery of the sacraments, the mystery of the Eucharist, and the mysteries of the Rosary. The Word of God condemns this false religious system calling it, instead, MYSTERY BABYLON THE GREAT (Revelation 17:5), for its roots come directly from ancient pagan Babylon.” [Pg. 78]

The next several chapters explain and refute papal infallibility, the Magisterium, and the Catholic priesthood itself that sets itself as an unbiblical hierarchy that Jesus condemned when He told His disciples: “You know that the rulers of the Gentiles lord it over them, and those who are great exercise authority over them. Yet it shall not be so among you; but whoever desires to become great among you, let him be your servant.” [Matt 20:25b-26].

Volume I of “Exodus from Rome” finishes with a biblical examination of the Rome’s use of the Mass, the Sacraments, Purgatory, Papal Indulgences and Prayers for the Dead all of which add up to a false system of soteriology that replaces the redemptive Gospel of Jesus with a works-righteousness in which there is no assurance of salvation for the “faithful.”

This is an excellent reference book for those who want to defend the faith and reach their Catholic loved ones with the truth. I would recommend it to those who ignorantly promote unity with Rome. I look forward to reading Volume II.