“Come out, come out, wherever you are
and meet the young lady, who fell from a star.
She fell from the sky, she fell very far
and Kansas, she says, is the name of the star.
She brings you good news. Or haven’t you heard?
When she fell out of Kansas
A miracle occurred.”
— Lyrics: Munchkin Land

The reaction of the Munchkins in The Wizard of Oz gives us a glimpse of the reaction of the folks back in 1917 in Portugal who reported what they saw as the sun falling from the sky. They were terrified, ran for cover, and when the storm passed, they were all delighted that such a miracle had occurred. 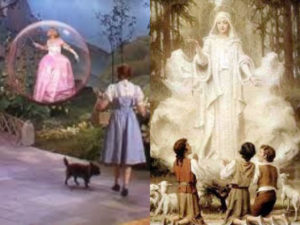 Wikipedia summarized the event and shared several eye witness accounts of the event:

“The Miracle of the Sun, also known as the Miracle of Fátima, refers to an event that allegedly occurred on 13 October 1917 above a large crowd who had gathered near Fátima, Portugal, in response to a prophecy made by three shepherd children. The prophecy was that the Virgin Mary (referred to as Our Lady of Fatima), would appear and perform miracles on that date. Newspapers published testimony from reporters and other people who claimed to have witnessed extraordinary solar activity, such as the sun appearing to “dance” or zig-zag in the sky, careen towards the earth, or emit multicolored light and radiant colors. According to these reports, the event lasted approximately ten minutes.”

“The sun’s disc …spun round on itself in a mad whirl when suddenly a clamor was heard from all the people. The sun, whirling, seemed to loosen itself from the firmament and advance threateningly upon the earth as if to crush us with its huge fiery weight. The sensation during those moments was terrible.”

“I feel incapable of describing what I saw. I looked fixedly at the sun, which seemed pale and did not hurt my eyes. Looking like a ball of snow, revolving on itself, it suddenly seemed to come down in a zig-zag, menacing the earth. Terrified, I ran and hid myself among the people, who were weeping and expecting the end of the world at any moment.”

The little Munchkins couldn’t have said it better. While the good witch arrives on the scene in a floating multi-colored globe, the Fatima lady is said to arrive in the same manner. The Fatima Crusader publication took this from witnesses: “A luminous globe, traveling from the east to the west, gliding slowly and majestically in space. It floated in fact towards the holm-oak.” And then the children spoke to the lady, although onlookers could not see her – just the light she emitted.

The ‘lady’ promised the three children to perform a miracle since the church authorities   would not believe them without a sign. So she complied, and gave them the so-called ‘miracle of the sun.’ Compare that to when the authorities asked Jesus for a sign, He wouldn’t do tricks for them, but said, “An evil and adulterous generation seeks after a sign, and no sign will be given to it except the sign of the prophet Jonah.” (Mark 12:39) And that sign was that He would die and be in a tomb for three days, the core of the gospel of our salvation that these apparitions always fail to mention.

Apparitions such as Fatima have altered Catholic piety to a great degree. Most false dogma about Mary started with these lying angels of light. (2 Cor 11:14) The short list of lies the Fatima queen promulgated include:

Another obvious sign of the demonic nature of this and other apparitions is that the ‘lady’ glorifies herself and not Jesus. They never mention the death, burial, and resurrection of Christ and His payment for our sins. Rather, they ask that chapels or memorials be constructed in their honor on the sites of the visitations. They direct devotion away from Jesus and to themselves. They take the attributes the Word of God applies to God alone and claims them as their own – every apparition does that.

The original third secret of Fatima that was released in 1963 and distributed around Catholic churches for decades was later renounced as a forgery by the Vatican, probably because it contained the false prophecy that unless Russia was converted to Catholicism by the second half of the 20th century, the great, great war would take place and the waters of the oceans would turn to steam.

Be that as it may, one line in that document sounds like dialogue right out of the film, The Wizard of Oz.  “The great and powerful will perish same as the lowly and meek,” she/it is quoted as saying. When looking at the film, Oz calls himself “the great and powerful” while Dorothy refers to herself as “small and meek.”

Even the name of the girl from Kansas, Dorothy, is a clue to her importance to author L. Frank Baum who wrote the novel in the year 1900, some seventeen years before Fatima. Dorothy: Feminine form of the Late Greek name Δωροθεος (Dorotheos), which meant “gift of God” from Greek δωρον (doron) “gift” and θεος (theos) “god”. And what a strange thing that the main Fatima seer, the only one of the three to reach adulthood, is named Lucy/Lucea, “which derives from the Latin word “lux” meaning “light.” Put them together and you have an angel of light seen as one of the pagan gods.

And, speaking of angels, the three children claim to have been visited by Michael the Archangel who preceded the Fatima lady’s visit. The kids say he frightened them and gave off bad vibes, but when the lady showed up, she made them feel peaceful. I’m getting a visual of Glenda the good witch versus the frightening vision of the “Great and Powerful Wizard.”

I would venture to conclude that both Baum and the soon-to-be canonized Lucy were influenced by the same deceiving spirit. The former was for sheer entertainment, and the latter was for diabolical purposes in order to turn the Catholic believer’s eyes from their Savior and onto a phantom. Thankfully, our God is more than “great and powerful,” He is Almighty and Omnipotent. Pray that Catholics would get back to God’s Word where they will truly find the way to the Celestial Kingdom when this life is through. And we all know, “There’s no place like Home.”