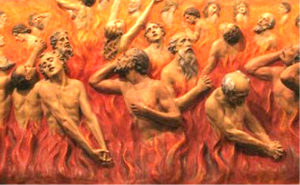 Purgatory: a cruel invention of the Roman Catholic Church – A false dogma that lays a heavy burden on every Catholic.  They hold men captive to a system that claims the keys to heaven. They create a mythical place where all forgiven people go that has the same fiery torments as hell except souls can be sprung after they are purified for an indeterminate period of time. It could be days, weeks, years, centuries, or millennia. The soul’s only hope is that their surviving loved ones offer enough rosaries and masses in their name to shorten their stay.

Jesus condemned the Pharisees for just such things – “They tie up heavy burdens and lay them on men’s shoulders” — Matt 23:4a

The late television pastor, Bishop Fulton Sheen, who is now being considered for canonization, put it this way:

“There was a provision made for making up for our failings if we die in the state of grace…, the necessity of purgatory is ground upon the absolute purity of God. As the holy book puts it, ‘there shall not enter into it anything defiled.’ So justice demands that nothing unclean, but only the pure of heart shall stand before the face of the pure God. Who of us would dare assert that at the moment of death that we were pure enough and spotless enough to stand before the immaculate Lamb of God? Do you think you could stand? I know that I could not.”

I’ll answer that question. Who is pure enough? Those whom the Lamb has washed clean, that’s who!

“Of how much worse punishment, do you suppose, will he be thought worthy who has trampled the Son of God underfoot, counted the blood of the covenant by which he was sanctified a common thing, and insulted the Spirit of grace?” – Hebrews 10:29

Purgatory is an invention of diabolical men that hijacked Christianity soon after the death of the apostles, just as the Apostle Paul warned would happen after his “departure.”

“I know that after my departure savage wolves will come in among you, not sparing the flock; and from among your own selves men will arise, speaking perverse things, to draw away the disciples after them.” – Acts 20:29-30

As Bible-believing Christians we have the assurance from God’s Word that to be absent from the body, is to be present with the Lord. That promise from God’s Word gives us such peace at the time of our impending death. Catholics are taught to believe that our faith is mere assumption and that we’ll be shocked when we land in a place of torment after we die.

But the contrary is a bigger risk. Catholics who die putting their faith in the Roman Church have no peace on their death beds. They believe they are facing a much worse and longer period of suffering than they are already in the throes of. They can expect to be carried away from the pains of death into the pains of fire. What a cruel hoax – especially if their misplaced faith lands them in hell instead of heaven if they did not put their faith in the blood atonement of the Lamb. I wonder if they will think they are in purgatory if they wake up in hell separated from God and imagine there will be an end to their judgment.

What spiritual malpractice it is to tell professing Christians that their faith and hope in the Lord Jesus Christ, the Lamb of God Who takes away the sins of the world,” is inadequate to bring us to Heaven! He came to set the captives free and Catholics are in desperate need to be released from this cruel master in Rome.

“Who gave Himself for us, that he might redeem us from all iniquity, and purify unto himself a peculiar people, zealous of good works.” Titus 2:14

** Go to      https://youtu.be/TcAHkGcC7cE   to listen to Jackie’s Scattered Sheep Report on this subject