Paul said, you were not ready yet. “I gave you milk, not solid food, for you were not yet ready for it. Indeed, you are still not ready” 1 Cor 3:2

“In fact, though by this time you ought to be teachers, you need someone to teach you the elementary truths of God’s word all over again. You need milk, not solid food!… But solid food is for the mature, who by constant use have trained themselves to distinguish good from evil. “ Heb 5:12,14

Can we just blurt out everything we know to a new believer or someone we’re trying to evangelize? They can’t take it all at once.

It’s hard to restrain oneself from just blurting out all that information it took decades to accumulate — not going to go over well. People will look at you like you’re crazy.  Try talking to someone about facts of church history, when they know little or nothing about it. Today you have to communicate with others as if they have no real basics of Christianity.

Evangelism at The End of the Age: 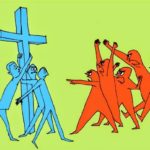 The truth is in the middle. And that can be a difficult balance to walk. We are to be in the world, but not of the world, Scripture tells us. We should seek those things above, not below. And yet, the Great Commission is to go out into all the world and preach the Gospel – usually to a hostile audience.

In the first century, the good news was being heard for the first time. In today’s world, especially in post-Christian western nations, people already have their opinions of Christianity formed. They have become desensitized to the hearing of the Truth by centuries of misrepresentations of the Bible.

In the world we’re living in, witnessing to others has to be adapted to our audience. And we’re going to have to overcome all the false impressions of the faith to pierce the darkness in the hearts of our hearers. And that is quite a challenge if we’re going to be any earthly good.

The old model of evangelism will only be scoffed at. Telling people Bill Bright’s Four Spiritual Laws won’t penetrate the hearts during this era of apathy to all things heavenly. The Truth was ‘in season’ then, but ‘out of season’ now.

The bearer of the good news – as we all are commissioned to be – have barriers that the apostles never faced. Their proclamations made clear distinctions between true and false, light and dark, Christianity and paganism. Yet we will encounter distortions of truth mixed with error from those whose minds are already made up.

Here are some 21st century walls we need to hurdle:

I could go on and on, but there are too many examples to mention.

I recall trying to witness to a Hare Krishna cultist at the airport back in 1987 who was handing out flowers. When I brought up the name of Jesus, he laughed at me and said, “Oh, you’re one of those Jim and Tammy Bakker followers.” He had no interest in anything else I might say.

Another time, I tried to share Jesus with a gay former Catholic who responded, “If I rejected the first church in history, why should I listen to you Johnny-come-lately?”

I have noticed over the years that unless the Lord is drawing someone and softens their heart, our labor is in vain to argue with them.

Since there is no formula to follow when sharing our faith, we just need to be willing vessels and God will bring to our minds what we should say when He brings them into our path.  If the Spirit is at work, we’ll know it as He will give us just the right words at the right time. If we’re struggling with what to say in the face of hostility, that just might mean God is not at work in that person. Maybe just hand them a tract and move along. Or as the oldies song goes, “Know when to walk away; know when to run.”

One very important biblical principle to keep in mind when speaking to unbelievers: don’t bombard them with Bible facts. Give them milk, not solid food. Witnessing is not to be a display of how much knowledge you’ve accumulated in your decades of Bible study. Don’t overwhelm them. Stick to the basics of the Gospel of Salvation and be ready to answer their questions.

The one-on-one witnessing is becoming a thing of the past, unfortunately, as the people you meet today have their eyes on their smart phones and headphones on their ears. Gospel tracts rarely get read and the Truth falls on deaf ears.

We’re seeing the darkness before the dawn.

“And let us not be weary in well doing: for in due season we shall reap, if we faint not.” – Galatians 6:9