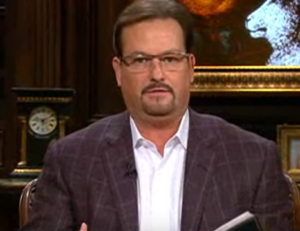 The news of televangelist William Todd Coontz being admitted into a federal prison was scarcely noticed.

Michael Stolp, an investigative producer for TV-station WSOC in Charlotte, North Carolina, tweeted on April 3rd, “It appears Todd Coontz is officially a prison inmate, but maybe not for long. Per court documents he was scheduled to voluntarily surrender to the Bureau of Prisons yesterday. His attorneys filed a motion for release pending trial, which a 3 judge panel approved 2-1 yesterday.”

The televangelist was given a month to file his appeal. According to the court docket, the televangelist’s opening brief and appendix are both due on May 02, 2019.

For those keeping track, the old cliche is true. “The Wheels of Justice turn slowly, but exceedingly fine.”

In June 2017, Coontz was indicted for failure to pay his federal taxes. Coontz was accused of filing fraudulent tax returns. Nine months later, in January 2019, Coontz was convicted and sentenced to five years in prison.

Before Coontz’s sentencing, religious fraud watchdog Trinity Foundation sent a 15-page letter to the IRS Exempt Organizations Division requesting the tax-exempt status of Rockwealth International Church, Coontz’s “ministry” be revoked. The letter reported, “Coontz is operating a religion business as a tax shelter by claiming that Rockwealth International Church is a ‘church’. This corporate entity fails to meet hardly any of the IRS 14-point criteria for what constitutes a church.”

The IRS publishes a weekly bulletin on Fridays. On rare occasions, these bulletins report religious organizations losing their tax-exempt status. We will patiently wait, hoping that Coontz’s “religion business” joins the list of revoked organizations.