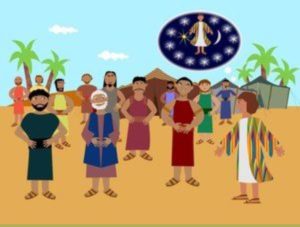 Jackie Alnor has written a controversial book about America and biblical prophecy titled The United States of Israel. Jackie’s goal is to address the claim of some Bible teachers that America is not mentioned in the Bible or that America doesn’t play a prominent role in the End Times.

Jackie believes that Isaiah 18 refers to America. According to this interpretation of Scripture, God warns that at a future time God will purge America. Referring to the tribes of Israel, God promised the descendants of Abraham, Isaac, and Jacob would become many nations. Who are these nations?

The book explores the role of the northern kingdom in the Bible and how they were scattered across the globe. Jackie’s view is that some of the descendants of the ten northern tribes eventually settled in the United States.

“The Treasury of Scripture Knowledge” found in the the Blue Letter Bible, which shows the literal translation of scripture, refers to “the land of the winged cymbal.” America’s great seal features the eagle. The United States also played an important role in re-establishing the nation of Israel, which fulfilled prophecy.

Several cults have explored these views, most notably the Worldwide Church of God. Jackie rejects their antisemitism and previous anti-trinitarian teachings by showing what they got right and what they got wrong.

Jackie has spent more than thirty years studying cults and the harmful teachings of American televangelists. She began her journalism career as a volunteer researcher for the late Walter Martin, founder of the Christian Research Institute. Jackie is the editor of website The Christian Sentinel.

— Barry Bowen founded the website Christian Headlines and published the news aggregator for 11 years while also working in the Christian film industry as a publicist and production assistant.  For three years he worked as blog manager at The Christian Post.

— Those with a marginal understanding of the Old Testament know the stories of the patriarchs: Abraham, Isaac, and Jacob. God referred to them as ‘the fathers’ of His people and He bestowed blessings and promises to them and their lineage. Even when their offspring offended the Lord, He would punish them, but still keep His Word, “for the sake of the fathers.”

Some of His judgments were quite severe. The book of 2Kings tells the story of the division of the House of Israel into the Northern Kingdom of Joseph, and the Southern Kingdom of Judah. The two kingdoms were at war with each other until God stepped in and allowed Assyria to take the Northern tribes into captivity around 720 BC. Only a small remnant remained in Samaria and the Galilee.

The Southern Kingdom of Judah, the keepers of the Temple in Jerusalem, did not fare much better when they turned to idolatry and they too were conquered around 587 BC by the Babylonians. But a remnant of them were allowed to return, although the majority of those captives were somewhat lost to history, the same as their troubled siblings before them. Then when Rome destroyed the Temple in 70 AD, those Jews were again scattered throughout the nations. Only a remnant remained, but always in hostile territory.

Did God Almighty lose track of all of those scattered tribes from all three diasporas? No. But history ignored all these wandering tribes, most of whom just intermingled with the nations of the Western World and forgot their origins. But many established their own nations and became new peoples. How do we know that? The Bible tells us so. This book documents this from Scripture. And historians in the past verify the veracity of God’s promises to His people, Israel – the whole house thereof, that they would be as numerous as the “Stars of the Heavens.”

Modern day theologians overlook these promises given to the patriarchs and the tribes of Israel and make the argument that all twelve tribes are represented in the Southern Kingdom and are now known as “Jews.” Yet even if they can cite a person from one or two of the Northern Tribes showing up in Judah in Jesus’ day, that hardly accounts for the masses of those who were scattered. They argue that in the first century, all the children of the land of Israel were called Jews. But is that true?

A couple of women who encountered Jesus represent how He viewed the situation:

“And, behold, a woman of Canaan came and cried unto him, saying, Have mercy on me, O Lord, thou Son of David; my daughter is grievously vexed with a devil.. But he answered and said, I am not sent but unto the lost sheep of the house of Israel.” – Matthew 15:22, 24

We know that story, how Jesus relented when she persisted, but notice He did not acknowledge this Canaanite woman as being part of the seed of Jacob. But in the case of the woman at the well, it was quite a different matter. Not only did He converse with her, but she was the first person in the Bible to whom He revealed himself as the coming Messiah.

“Then saith the woman of Samaria unto him, How is it that thou, being a Jew, askest drink of me, which am a woman of Samaria? for the Jews have no dealings with the Samaritans… Art thou greater than our father Jacob, which gave us the well, and drank thereof himself, and his children, and his cattle?” John 4:9,12

Scripture does not call this woman Jewish. Rather she is just a Samaritan –Bible teachers acknowledge is a mixed breed of the remnant of the Northern Tribes that mixed with the Gentiles of the land. But Jesus treated her like the daughter of Jacob as she claimed to be, unlike His treatment of the Canaanite woman. Yet the apostles were irritated when they found Him speaking to her.

So it’s plain to deduce that not all descendants of Jacob who were left in the holy land during the time of Jesus were considered Jews, since they were not part of the Southern Kingdom. And the Jews despised them. Jesus tried to correct them when telling the story of  “the good Samaritan” but pride wouldn’t let the Pharisees accept that. That same attitude prevails today when the lineage of the Northern Tribes is rejected as not part of “The Chosen People” of God.

Even if the mass majority of the scattered sheep of all the tribes of Israel have forgotten their heritage, just as it was prophesied that they would, they can be identified by the promises made to the fathers.

The United States of Israel presents the clues. Today’s Pharisees will not even entertain the thought, though they have no other explanation for the prophecies of the “company of nations” leading to the gathering of them all in the Providence of God into the one melting pot nation known for its biblical heritage.

Jackie Alnor is a veteran Christian watchman, researcher, and journalist. She is the former director of the Rapture Ready Radio network and publishes a monthly newsletter called ‘The Scattered Sheep Report’ that tracks the signs of the times relevant to the convergence of prophesied events. She is the author of the book ‘The Fleecing of Christianity: Televangelism in Bible Prophecy’, which takes televangelists to task for false teaching and fundraising fraud. She co-founded “The Christian Sentinel,” a website that includes investigative reporting on matters that concern the church.