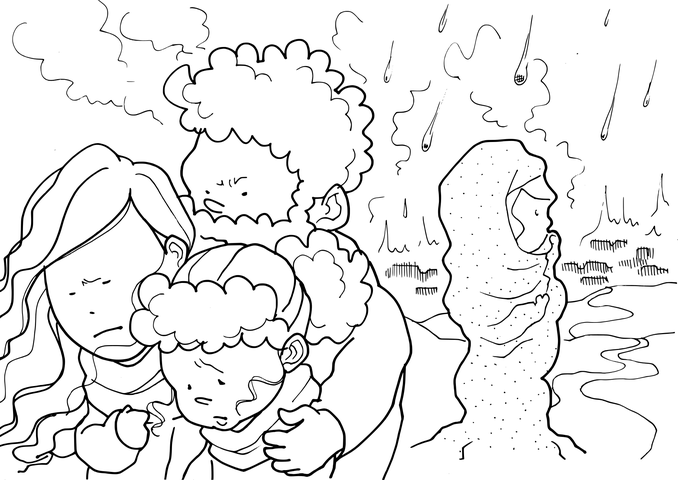 “The LORD has made everything for its own purpose,
Even the wicked for the day of evil.” – Proverbs 16:4

Many of us watched in horror this past year as the unforeseen violent protests graced our TV screens. Young people of every race and color went on rampages, burning down buildings, even police stations, seemingly unrestrained. Innocent bystanders were slammed to the ground and kicked and beaten by these punks mercilessly. The government even seemed to be on the side of the lawless youth, being instructed by their mayors to back off. And on top of that, when they did react accordingly, more protesters came out demanding the police be defunded.

And if that’s not enough, even some churches came out in support of these Marxist organizations funding these riots – Black Lives Matter (BLM) and Antifa.

But for those of us versed in Bible prophecy, none of this came as any surprise. We saw it coming long ago. We took the Lord’s words to heart that before His return, life would be as in the days of Noah and the days of Lot. Sure enough – as in Noah’s day, God looked down and only saw evil continually. Likewise, as in the days of Lot, the two angels were sent to witness the sight and respond to the sodomizers who even wanted to force their perversions upon God’s messengers. Sigh!

So, how did it come to this? Well, it didn’t happen overnight. This new breed was programmed and prepared for the devil’s purposes all their lives. There are many co-conspirators: Hollywood, Public Education, Pseudo-Science, Psychology, the Music Industry, and Materialism, just to name a few. Like frogs in a kettle, they are now at the boiling point.

Catholic lay minister, Michael Voris, recently interviewed George Barna about the condition of America as far as our Judeo-Christian foundation goes – and it is dead and gone. The famous pollster delivered the horrifying news:

“We focus primarily on worldview. And the reason we’re doing that is that’s the headline for me. The fact that only six percent of adults in America have a biblical worldview – that is, their lifestyle, their decisions are driven by biblical principles… Only 6% Americans, that’s down from 12% in 1995… and the fact that that’s actually declining, and is at such a low level tells me that that’s why America is in such deep turmoil today.

“We tested and what we found is that actually 88% of Americans have a worldview that we describe as syncretism, which means that basically all they’re doing is they’re cutting and pasting together different elements of all these alternative or competing worldviews into something that is very personal and customized.

“When we look at the data from a generational perspective, what we see is that the future, I hate to say it but it may be even bleaker because from generation to generation fewer and fewer individuals in America are embracing a biblical worldview. You got builders and boomers are in the 8 to 9 percent range, you got the gen-x you’re at 5 percent. You look at the millennials they’re 4 percent, but the latter half of the millennial generation are 2 percent. How much lower can you go?” [ www.youtube.com/watch?v=J1sVAWOasQw ]

Although this is not happening only in America, this antichrist phenomenon is all over the civilized world. This worldview has no moral compass. Its adherents, as Barna pointed out, don’t think very deeply. They’ve been thoroughly programmed as cogs in a wheel. As in communism, the agenda of the collective is more vital than the individual. You can lie, cheat, and steal if it furthers the cause of the machine. This new worldview has been deeply programmed into this young generation of ‘group thinkers.’

What can we expect from this “wicked generation” in the future?

Think what this world will look like when the baby-boomers die off – or after the Rapture. The hatred for the Bible is getting very popular. Street preachers are being attacked around the world. Churches are being torched. Hating Christians is becoming the norm.

Think about the popularity of The Handmaid’s Tale on HULU. Margaret Atwood, the author of the book the series is adapted from, makes it no secret that this ‘tale’ is her vision of what life would look like if these horrible Christians were the ones in control. One online reviewer summarizes the story like this:

“Posterior to a worldwide fertility crisis, an extremist theocratic religious organization takes control of the United States government, suspending the constitution and forcing women into state sanctioned rape. Separated from her daughter and her husband, Protagonist June Osborne must learn to survive in this oppressive regime.” [ https://www.imdb.com/title/tt5834204/plotsummary ]

Throughout the series, the task-masters quote a plethora of Old Testament out-of-context passages meant to revile the word of God. Atwood explains it like this:

“The deep foundation of the United States—so went my thinking—was not the comparatively recent 18th-century Enlightenment structures of the Republic, with their talk of equality and their separation of Church and State, but the heavy-handed theocracy of 17th-century Puritan New England—with its marked bias against women—which would need only the opportunity of a period of social chaos to reassert itself.” [ https://lithub.com/margaret-atwood-on-how-she-came-to-write-the-handmaids-tale/ ]

This is just one example of Hollywood’s crimes against God and humanity. There are more than we can count. The devil has dug in his heels and yet I’m convinced that there are at least 70,000 millennials that haven’t bowed their knee to Baal. They need our encouragement to hold fast till the end.

For the others, we must keep in mind: these young people are the victims – snatch whom you can out of this raging fire while there’s still time.