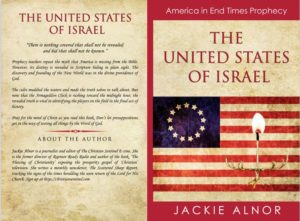 FROM THE FORMER DIRECTOR OF RAPTURE READY RADIO
“There is nothing covered that shall not be revealed; and hid that shall not be known.” Prophecy teachers repeat the myth that America is missing from the Bible. However, its destiny is revealed in Scripture hiding in plain sight. The discovery and founding of the New World was in the divine providence of God. The cults muddied the waters and made the truth taboo to talk about. But now that the Armageddon Clock is rushing toward the midnight hour, the revealed truth is vital in identifying the players on the field in the final act of history.
This book examines who’s who in the line-up of powers that will manifest during the final seven years of this historic era. Where does the European Union, the state of Israel, the Vatican, Russia, the United States of America and the 144,000 fit into the coming time of Jacob’s trouble?
NOW ON AMAZON
Share on Facebook Share
Share on TwitterTweet