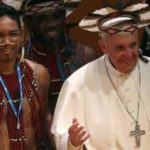 The message coming from the first week of the three-week Special Synod for the Pan-Amazon region at the Vatican is ringing out loud and clear: The long-held Catholic belief in the Bible and Sacred Tradition, as the two pillars upon which their religious institution sits, has come crashing down. The Vicar of the Antichrist, Pope Francis, has come out of his pagan closet. The mask is off. Insightful Bible-believing Christians have seen through that mask for eons, but the head-in-the-sand pew-sitters’ collective head is spinning.

In a Vatican news release[i] published this past weekend, it was reported that ‘A Synod exists to listen constantly to the Holy Spirit’… Walking together means listening to ‘the agony of Mother Earth.’”

What is Mother Earth saying?

“Once again the request was heard in the Synod hall to be constantly aware of the suffering of the indigenous population who have a sovereign right to exist in the Amazon. Discovering the seeds of the word of God in the cultures and traditions of the region means recognizing that Christ already lives in the peoples who have not yet heard the Gospel. The Gospel, in fact, is not the exclusive patrimony of any one culture.”[ii]

This idea underscores what the current pope has been saying since he first took office as lightening struck St. Peters Cathedral in Rome. Namely, that God speaks to people in every religion in the world – each one gets a little piece of divine revelation and if all religions unite, all humankind will be as one. (Queue up John Lennon’s Imagine.)

Has the Vatican now redefined the term “word of God”? Apparently so. This from the Vatican news release of October 14, 2019:[iii]

“The Word of God is an active and merciful presence; it is educative and prophetic, formative and performative. It underpins that challenge of integral ecology and can be a means for social, economic, cultural and political development and a new humanism.”

The new humanism? Yes, this is what the pope called for as his motivation for calling for this synod and the one starting on May, 14, 2020 “to reflect on the theme ‘Reinventing the Global Educational Alliance’”.[iv]

“Pope Francis called for summoning up ‘the courage to capitalize on our best energies’. The status quo should be replaced by giving education ‘a long-term vision’, to create a new humanism.”[v] 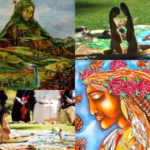 The Pope was the guest of honor and was presented with some sort of magic black ring from the paint-and-feathered shaman who presided over the circle of merry-makers. Francis welcomed the shamaness’ nude wooden statue that was the focus of the ritual. It was later discovered to be none other than Inca goddess Pachamama.

One Catholic critic in shock over this ceremony wrote,

“This is sheer paganism. Our pope presided over, and blessed, a pagan ritual where false gods were worshiped and called upon. He is no doubt infested with demons himself.”[vi]

Michael Voris, head of the right-wing Catholic media group, Church Militant, had this to say:

“In the spirituality of the millennia-old religions of Central and South America, the name of Mother Earth is Pachamama, the goddess of fertility. She is revered as the goddess who presides over planting and harvesting, embodies the mountains and causes earthquakes. She is, in short, the giver of life, and the source of the earth, sun, moon and water… Pachamama is seen as a conscious personal being. Sacrifices are made to her. It is true that different religions, and there are many in the region, view ‘Mother Earth’ with varying understandings, but this Pachamama spirituality has deep, deep roots in the forest of the Amazon and beyond.”[vii]

Voris was one of the leaders of a contingent of ‘faithful’ Catholic protesters who took a stand in St. Peter’s Square in Rome before the Synod opened in Rome. They jointly prayed the rosary in faith that the Queen of Heaven, also known as the Mother of God, would bring the victory. Marian apparitions have supposedly prophesied of a coming time when the Vatican would be under the control of a dark anti-pope.

What they don’t realize is that Pachamama is just an earlier version of the Babylonian Queen of Heaven that had brought the Israelites into idolatry in the Old Testament, bringing upon themselves the condemnation of the God of Israel. [viii] 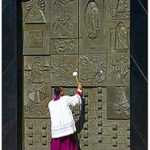 I tried to warn Mr. Voris about this long before all this befell him, but he wouldn’t listen. I sent him an article I wrote back in 2003, Entertaining Devils Unawares,[ix] in which I documented that Pachamama was artistically preserved in the Bronze Door of the then new “Cathedral of Our Lady of the Angels”[x] in Los Angeles. The description of the various depictions of ‘Our Lady” is still on that Catholic Cathedral’s website in the link “Art” in their menu. Under the sub-heading, “Manifestations of the Virgin,” Number one reads:

“1. Virgin of Pomata — This image from the Andes village comes from the late-colonial School of Cuzco. Mary wears a feathered Inca headdress and a billowing dress suggestive of Pachamama, the Inca mountain goddess.”

Voris responded by blocking me from comments on his website and Facebook page. He can’t say he wasn’t warned (eye-roll). And even the Los Angeles Times reported on how ancient goddesses were being recognized by the Diocese of Los Angeles as prior incarnations of the ‘Mother of God.’  In their story of the opening of the new Catholic Cathedral that was published in their Sunday magazine on September 1, 2002, In Our Own Image,[xi] Times reporter Reed Johnson wrote:

“Down through the centuries she has gone by many different names: The Virgin of Pomata. The Virgin of Montserrat. The Divine Shepherdess. The sorrowful Mater Dolorosa, grieving for her Son, depicted in Michelangelo’s Pieta. La Virgen de Guadalupe, a.k.a. Our Lady of the Americas, who revealed herself not to the rich and powerful, but to the Indian peasant Juan Diego. The formidable Madonna of the Apocalypse, destined to help rid mankind of Satan.”

Traditionalist Catholic, Michael Matt, editor of the conservative Catholic publication, The Remnant Newspaper, wrung his hands over what he saw as a blatant take-over of Satan over his beloved ‘Mother Church.’ In a recent podcast he titled ‘Hippies in the Vatican,’[xii] he said:

“All we hear here in Rome is, ‘become environmentally conscientious and awake  — that’s the most important thing. Heaven is replaced now with our common home. When they talk about common home, they refer to it almost in reverential terms. We must know, love and serve Mother Earth…Like it’s sacred, like it’s pantheism or something… What happened to our church is the question we’re all asking here. In Rome this week as we watch the spirit of Vatican II now become what looks like the incarnation of a new christ. The old Christ doesn’t seem to be here in Rome this week. It’s a new christ… it’s a christ who speaks through both the shaman and the priest at the same time and with the same efficacy… Satan himself couldn’t have disoriented these men any more than they are… If this is truly what they’re going to do now moving forward in the Catholic Church, if this is their new path…they’re mis-representatives of Christ. And the spirit of Vatican II has turned them all into missionaries of…. The psychobabble of the modern world – the world that has rejected Christ and has co opted this Synod and the entire Church in an effort to create the impression now that Christ Himself – this is where the blasphemy comes in – that Christ Himself, this new christ is blessing and approving of the entire masonic agenda of the One World Religion and the New World Order.” 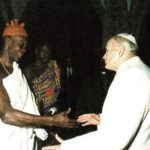 Unfortunately for these well-meaning men who work tirelessly trying to preserve the old Catholic religion, Pope Francis has cut them off at the pass. In the tradition of former Pope John Paul II, (who also presided over a witch doctor’s ritual involving a cauldron of liquid from which ‘Saint’ John Paul drank of it from a shell at an ecumenical gathering in Assisi), Francis is creating that new global religion. He has set up his own hand-picked school of cardinals who are a rubber-stamp board for him to get away with this final transformation of the Mother Church. Michael Voris and Michael Matt are too late. Their beloved religion has now been taken over by a gay clergy and they don’t realize that this is nothing new. I do feel sympathy for them. My heart broke for Voris when he said in his opening statement at the Roundtable on Heretical Amazon Synod:[xiii]

“Pope Francis has brought such moral and political confusion to the world and the church that he needs to recognize this and resign…The entire purpose of this so-called Amazon Synod is to complete the work of revolutionaries within the Church who began their undermining of the Church many decades ago. Since Pope Francis, far from having attempted to prevent this evil, has actually contributed to it, sensible, faithful Catholics, be they political conservatives or not, Americans or not — for those are all categories far more confining in scope than our shared love of the Ancient Faith — we assert that Pope Francis has forsaken his sacred duty and needs to step down. This becomes more and more clear with each passing pronouncement, exhortation, consistory, ecclesiastical appointment, shuffling of the Curia, and so forth. Pope Francis and his clerical allies are creating a globalist organization with a Catholic-appearing face. What is emerging is not Catholic. The façade should be dropped and, for once, truth be allowed to prevail.”

And I couldn’t help sympathizing with Michael Matt when he said:

“They don’t realize how passé you have become’ how much you are the sort of stereotypical hippie, the aging hippie that’s just lost track. It’s not groovy anymore… They changed the words; they changed the vocabulary. Mother Church, for example. She has become Mother Earth.”

Their weapon of choice is the rosary. As I watched them babbling the Hail Mary’s and the Hail Holy Queen prayers, all I could think is, what a horrible cosmic joke on them. They’re praying to the Queen of Heaven, the one and the same goddess of fertility that their institution has come out to worship: Pachamama.

This is the dawning of the Age of Aquarius

No more falsehoods or derisions

And the mind’s true liberation

When the moon is in the Seventh House

And Jupiter aligns with Mars

Then peace will guide the planets

To be continued . . . next time as we examine the very same nature spirit at work in our own ranks

[Feel free to share or publish with attribution and link to christiansentinel.com]