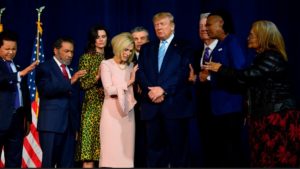 Christians were shocked and appalled when United Methodist pastor, a Missouri congressman, Emanuel Cleaver, gave the opening prayer for the new 2021 Congress, and concluded it saying:  “We ask it in the name of the monotheistic god, Brahma, and god known by many names by many different faiths. Amen and awoman.”

Many pointed out his ignorance in assuming that the Latin word “amen” had something to do with gender. And rightly so. But what was even more appalling was his calling upon the Hindu “god of creation”: Brahma and falsely identifying that as monotheistic – which means belief in one God. Hinduism has many gods.

“Brahma (Sanskrit: ब्रह्मा, IAST: Brahmā) is the creator god in Hinduism. He is also known as Svayambhu (self-born), Vāgīśa (Lord of Speech), and the creator of the four Vedas, one from each of his mouths.”  Wikipedia

This leftist pastor was merely expressing what the new religion teaches: all world religions are equal and each has a bit of truth. He’s not unique in this politically-correct dogma. Pope Francis sings the same hymn as he continues in the tradition of Saint Pope John Paul II, who famously brought all the world religious leaders together in Assisi, Italy – pagan, wiccan, animists and Judaeo-Christian alike.

Yet when President Trump participated in a Hindu festival last year, few outcries of shock came out of the Evangelical church circles.

Trump “marked the coming fall festival of Diwali in the Oval Office with the ceremonial lighting of the Diya, a traditional oil lamp…” Diwali is largely celebrated by Hindus, Jains, Sikhs and some Buddhists every autumn. It’s one of India’s most widely-celebrated holidays and represents light overcoming darkness… The first president to celebrate Diwali in the White House was former President Barack Obama in 2009.” [Source: Trump marks Diwali holiday as he ramps up trade relationship with India, ABC News]

For a better understanding of what Trump was celebrating, Wikipedia gives a concise description:

“One of the most popular festivals of Hinduism, Diwali symbolizes the spiritual ‘victory of light over darkness, good over evil, and knowledge over ignorance’… The festival is widely associated with Lakshmi, goddess of prosperity, with many other regional traditions connecting the holiday to Sita and Rama, Vishnu, Krishna… In the lead-up to Diwali, celebrants will… perform worship ceremonies of Lakshmi, the goddess of prosperity and wealth.”

Trump appears to be a tie that binds all religions together in universal brotherhood. Evangelical Christians will argue that he is president over all Americans and that includes those of all religious backgrounds. That’s a very convenient ploy of the spirit of this age that is busy bringing about his New World Order. The president preaches against the political aspirations of the NWO, but is quite at home with the New World Religion.

But what do we know about Trump’s theology?

Everybody’s talking about convergence these days. But while all are talking about unity, division seems to be the order of the day. The world offers us many ‘this or that’ choices. Democrat or Republican? Catholic or Protestant? Right or Left? Progressive or Conservative? Each side says God is with them and the other is of the devil. It’s the old yin and yang.

“In Ancient Chinese philosophy, yin and yang is a concept of dualism, describing how seemingly opposite or contrary forces may actually be complementary, interconnected, and interdependent in the natural world, and how they may give rise to each other as they interrelate to one another.” [Source: Wikipedia]

But true believers are not of this world nor subject to its definitions. We can’t be forced into either of those niches. We can make a third choice, one that is not held sacred in the world’s schema. We stand on the outside looking in as citizens of a Heavenly Kingdom. Talk about thinking outside the box!

The god of this world has a plan and we don’t fit into it. We are not ignorant of his schemes, if we are abiding in Christ and His Word. In fact, the plan of the devil is to get us out of his way and for us to take our faith with us. Only then can he be free to launch his “plan of the ages.”

All the yins and yangs hate the true children of God. They see us as the outsiders we are.

As Americans, we’re on ground zero of this battle we see waging now in our day. The ‘Left’ hates us for our failure to compromise with their evils and the ‘Right’ despises us for not compromising with false brethren for the sake of unity. We can’t win as we cannot accept either option.

The true Jesus of the Bible unites His called-out ones. But the one coming in his own name to replace Jesus will bring yin and yang together to create the whole. And the world will marvel at his apparent wisdom and charisma.

The spirit of the age has revealed his “Plan” in false religions and various secret societies over the millennia. He’s gearing up to unify the planet. His appointed man will be the tie that binds all together. As he keeps pointing out, “there’s strength in numbers.” Remember his anthem:

When you’re down and out, there seems no hope at all
But if you just believe, there’s no way we can fall
Well, well, well, well, let us realize
Oh, that a change can only come
When we stand together as one, yeah, yeah, yeah
We are the world
We are the children
We are the ones who make a brighter day,
so let’s start giving

We may see in our lifetime the Plan of the Ages as spelled out in various esoteric groups and secret societies to install the man of the hour – the false savior who is just waiting in the wings. The occult book written by Manly P. Hall, The Secret Destiny of America, spells much of it out – why our national monuments and the message on the American seal point to the new world order, i.e. Novus Ordo Seclorum. It may sound like a scene from the film, National Treasure, but Hollywood came up with the wrong interpretation.

The Plan is the undoing of the Tower of Babel. Hall gives clues:

The esoteric gobbledygook of the various mystery schools and channelings of various “ascended masters” is extremely difficult to simplify for those of us with a biblical worldview. But my observation is that there is consistency in these doctrines of demons from ancient times up to today. Our society is filled with their symbolism and ideas although the majority do not even know where these things originated. But they are contrary and hostile to our Triune God and His Word. But these demonic concepts permeate America from the very foundation of our Masonic founders – who mixed deism with mysticism.

There are evil spirits in our material world.

“Speaking through Alice Bailey, Djwhal Khul, a demonic spirit guide, comments: ‘A violent STREPTOCCOCCIC GERM and INFECTION has menaced the life of humanity… THE GERM… makes its presence felt in infected areas in the body of humanity…. Therefore, there is MUCH DESTRUCTION PERMITTED by the Custodians of the Plan and much evil turned into good.’” (emphasis in original) [One World Order is Coming! Who Will Rule? By Cathy Burns, @1997, pg 21]

And who are the targets of their hatred? Christians, of course. They prefer to convert Christians to the Plan by deception and infiltration. They’ve done a good job.

The antichrist comes looking like a lamb but speaking like a dragon. Here’s an example. The New Age prayer, known as The Great Invocation, was channeled to telepath Alice Bailey by Khul, quoted above. This incantation was very popular back in the 80s when the new age movement gained acceptance. It is enshrined on the website of Lucis Trust, an occult publishing arm that was originally named Lucifer Trust. They updated their collective prayer in the year 2000 “in response to language sensitivities in a multi-cultural world.” This section is from the original:

They updated the gender words and removed ‘Christ’ from their prayer – though they didn’t have the true Christ in the first place, but I suppose today’s followers aren’t up to snuff on the concept of ‘christ consciousness’ which is their doctrine.

So, What Does This Have to do With Trump?

President Trump is a modern-day phenomenon. No political leader in American history has ever gathered together the masses of humanity like he has. In the past five years, win or lose, his followers scuffle to touch the hem of his garment. (see my article: Come Together Right Now Over Trump  )

If you think I’m exaggerating, consider this: Catholics call him ‘Constantine’; Evangelicals call him ‘Cyrus’ and his opponents fear him for appearing to be a messiah.

He may have been cheated out of the election and betrayed by his VP in the mode of Judas, but all that only empowers him to continue to be the powerful force in a different arena.

I’m not convinced that he’s the antichrist, but when the man of sin arrives – and I believe that is soon – will he be any more dynamic than Trump?

[The Christian Sentinel will continue to monitor the situation and pray for the ‘mind of Christ’ as it all unfolds.]

For further intel, listen to podcast on the topic at: https://www.blogtalkradio.com/rapturereadyradio/2021/01/06/scattered-sheep-report-with-jackie-alnor